Academia and business struggle to find common ground in Harvard

Academia and business struggle to find common ground in Harvard April 10, 2017 By Pavel Koshkin During the Apr. 10 discussion at Harvard’s Davis Center for Russian and Eurasian Studies the representatives of academia and business presented the Moscow-based International Center For Emerging Markets Research. The long-tern goal of the center is to foster dialogue of academia and business both locally and globally. New Realities A new bottom-up research initiative by Russian and foreign experts — the International Center For Emerging Markets Research (ICEMR) at The Peoples' Friendship University of Russia (RUDN University) — seeks to establish closer cooperation with Harvard University as well as foster understanding of economic realities in Russia and other emerging markets. However, in the long-run, it pursues a more audacious goal — bridging the gap between big business and academia in Russia and other countries with transition economies. It was presented on Apr. 10 at Harvard’s Davis Center for Russian and Eurasian Studies during the "New Reality and Russian Markets” discussion and brought together both Russian and foreign researchers. The initiators of the Center make it clear that they have a very bold plan to become one of the leading academic hubs to provide hard analysis on emerging markets, focusing on Russia and its relations with the U.S. and Europe. The final goal is to attract big business and found common ground with those who are used to earning money and cutting deals.     According to Svetlana Balashova, executive director at International Center for Emerging Markets and a professor at RUDN University, business and academia should team up to come up with effective solutions collaboratively. “Today universities are trying to adjust their educational programs to the demand of business. There are few positive examples and we need more,” she said implying that International Center For Emerging Markets Research could be such an example. “Establishing the Center is an attempt of academia to meet the demands of big business,” she added.  Rawi Abdelal, director of Harvard’s Herbert F. Johnson Professor of International Management, is expected to serve on the scientific board of the ICEMR. “As an individual scholar I certainly plan to be part of the ongoing development of this agenda,” he said. According to him, the dialogue between business and academia in the U.S (including in Harvard) is not always very robust — “except through business schools and schools of management.” Abdelal and other experts who took the floor during the Apr. 10 discussion argue that people who can translate the language of academia into the language of business (and vice versa) are in demand today. Such specialists can improve the dialogue by targeting different audiences and being able to see eye-to-eye either with scholars or entrepreneurs. Bruno Sergi, ICEMR’s scientific director, echoes Abdelal. He believes that business and academia are struggling to find common ground. He hopes to tackle the challenge through the ICEMR imitative, which he presented at Harvard University's Davis Center on Apr. 10. “Business people don’t believe that academics are persons to give a practical solution, at least because most scholars deal with abstract ideas and cannot apply them in the real life,” he said. “So, the challenge for our research group is to find common ground with business leaders and persuade that they might benefit from our research.” At the same time, Sergi pursues other goals — more audacious and challenging. “Our first priority is to bring Russian, American and European experts together to identify solutions and opportunities in the new realities faced by emerging markets,” Sergi said adding that he plans to involve researches and economists from the world’s top universities, including six Nobel laureates. He says that some of them seem to be ready to cooperate. Likewise, Andrey Berezin, ICEMR's director for development, hopes that the Center will be able to establish close ties both with business and government. He believes that there is a lot of opportunities to cooperate with the Russian government in the oil and gas sector. Источник: http://hgc.harvard.edu/news/ academia-and-business- struggle-find-common-ground- harvard 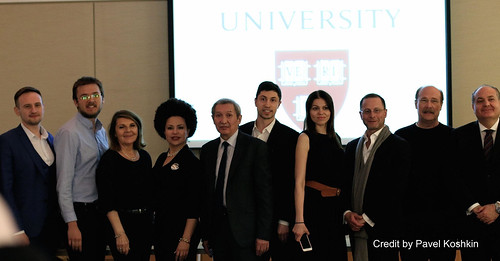